In Python, sklearn is used as a machine learning tool for creating programs on regression, cluster, etc. A lot of times, importing it throws an error - No module named sklearn.

This means the system cannot find it due to a bad installation, invalid Python or pip version, or other problems.

Causes of ImportError: No module named sklearn in Python

Suppose we install sklearn or any Python library into the system. The system says that the library has been installed successfully.

But when we import the library, we see the error - No module named 'sklearn'. 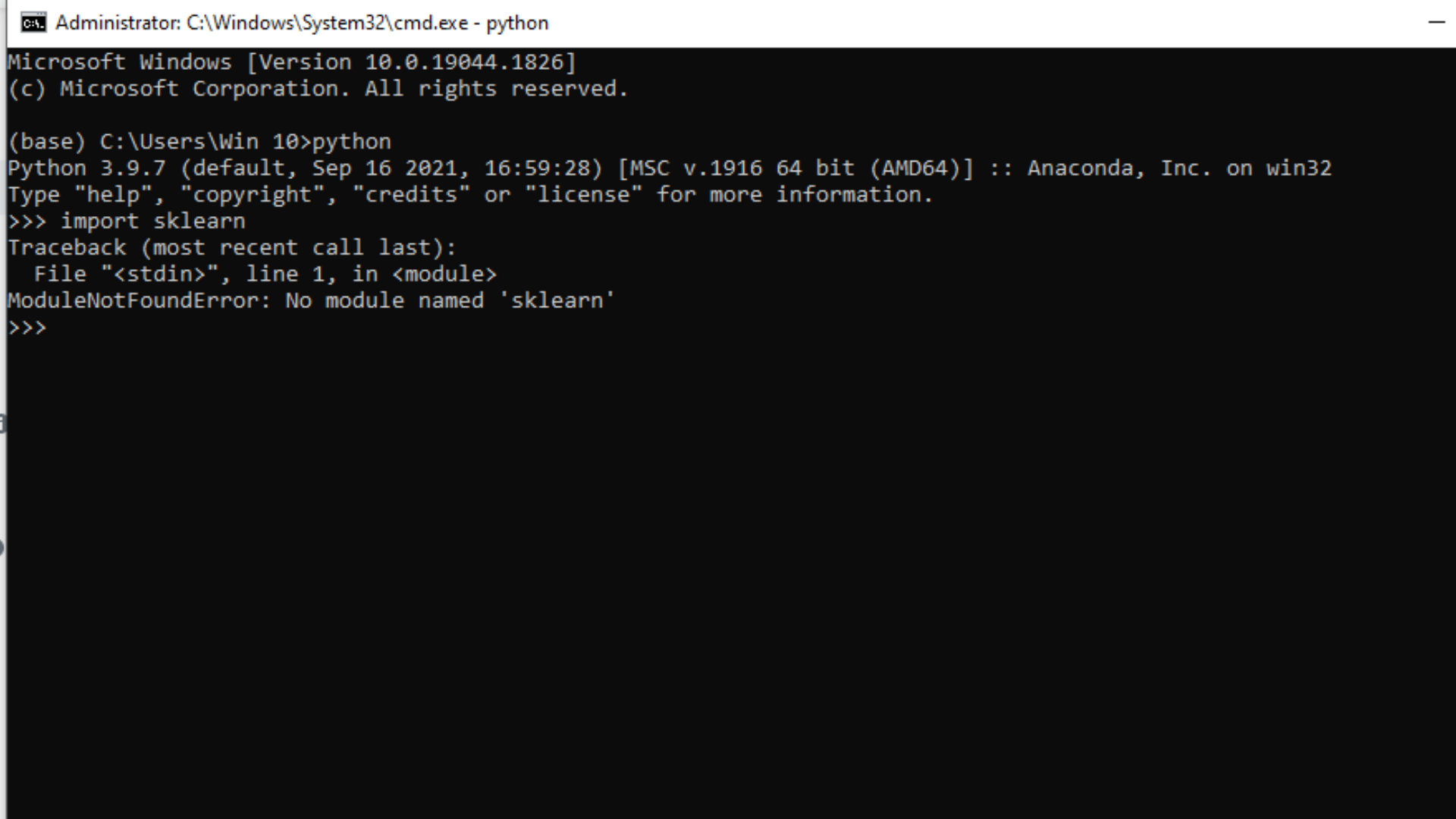 This can happen for mainly two reasons.

This article explains how to install sklearn into the system correctly.

Installing sklearn into the Windows system is one of the methods through which we can solve the ImportError: No module named sklearn error in Python. There are two prerequisites for it.

Knowing the pip and Python versions beforehand is not only helpful but advantageous. Bad installation happens when the Python version does not match the pip version inside the system.

There are three different ways to install Python on Windows, whichever seems suitable.

Only the first two alternatives, the most common installation techniques in a Windows system, will be the subject of this section. There are differences between the two official Python installers for Windows and some significant restrictions on the Microsoft Store bundle.

Installation From the Microsoft Store

The Microsoft Store bundle is the greatest option for a hassle-free setup. This has two main steps. 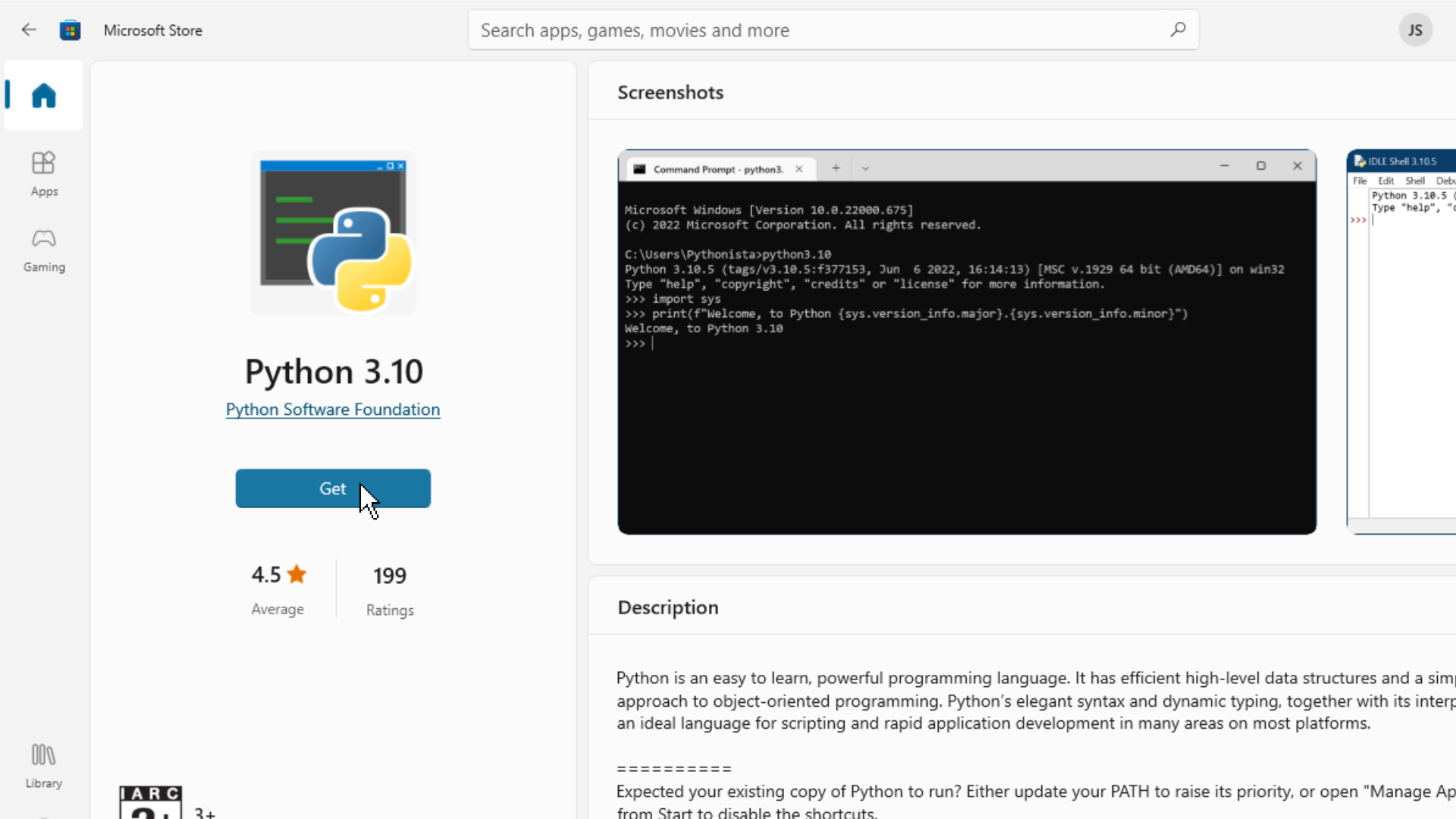 To download the whole installer, adhere to the following steps.

Go to the next step after the installer has finished downloading.

After selecting and downloading an installer, double-click the downloaded file to launch it. You’ll see a dialogue box similar to the one below. 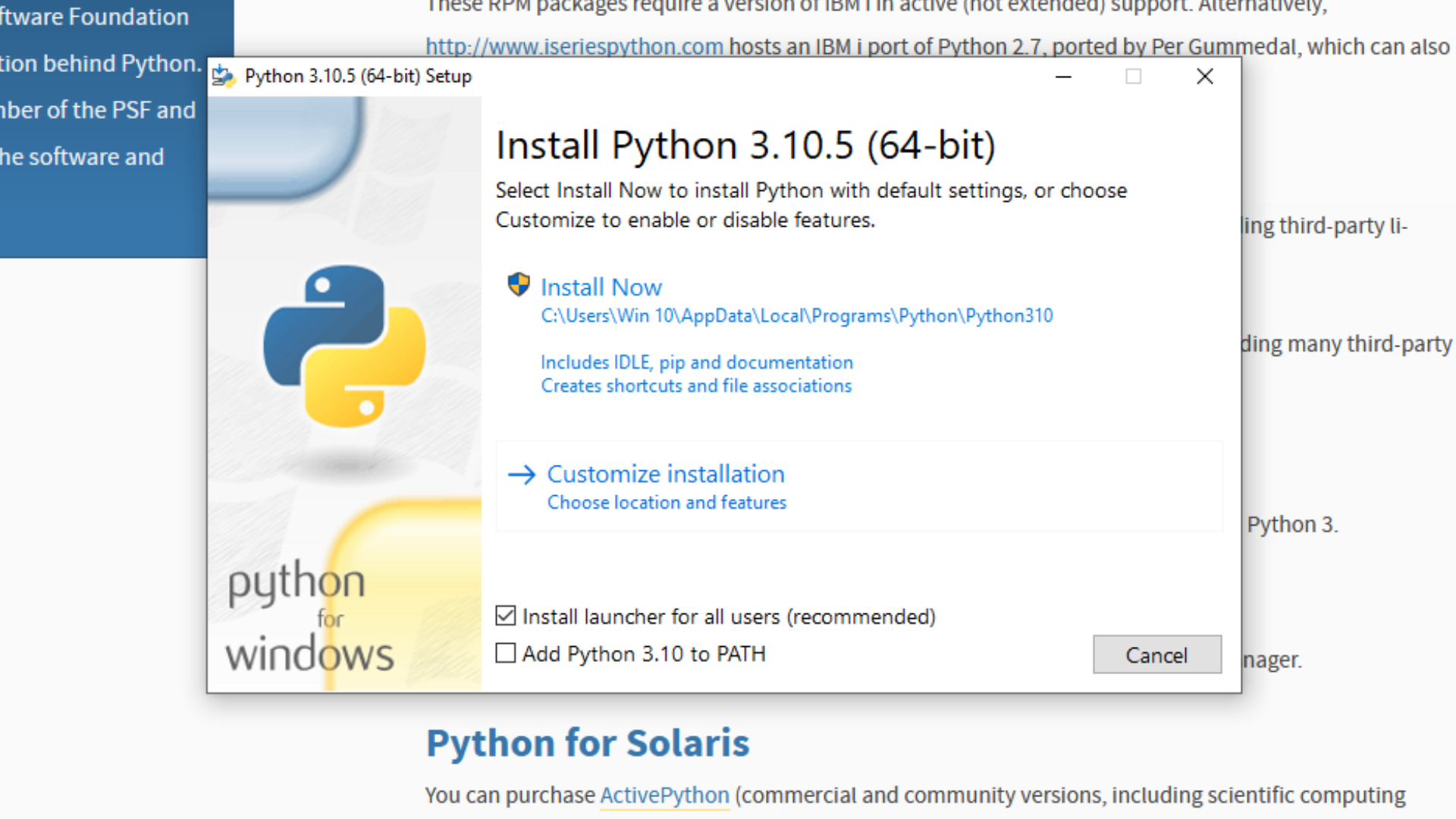 There are four things to notice about this dialog box.

The installation process using the full installer gives complete control over it. Following these steps will install Python on the system.

Now the installation of sklearn can be initiated to solve the No module named 'sklearn' error.

Launch a command-line runner like PowerShell or the command prompt to install sklearn this way.

How to start PowerShell is as follows:

PowerShell can be accessed as an alternative by right-clicking and selecting Open here as an administrator.

Inside the command line runner, the first step is to install pip.

Pip is a Python package manager that downloads and installs Python libraries inside the system. To install pip, type the command:

Once Python and pip are set up, sklearn can be installed. Type the command:

This will install the scikit-learn directory from the pip repositories.

If the system already has an older version of Python, or sklearn is required for a previous version like Python2, use the command:

If all the steps are executed correctly, the No module named 'sklearn' error would be resolved.

Once it is installed successfully, we can check its version by using: 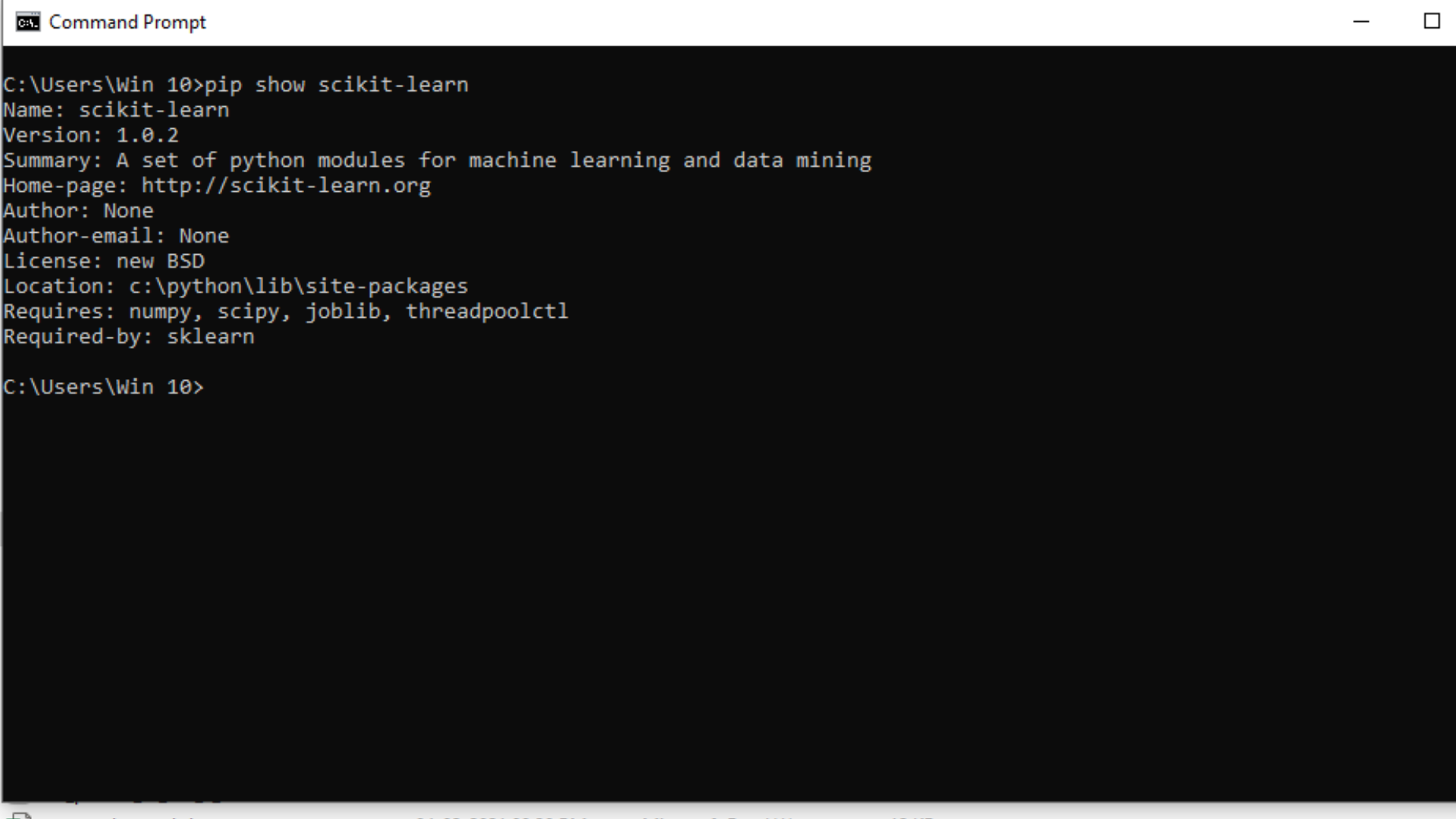 It can be seen in the above image that the system can detect sklearn, which means our error - No module named 'sklearn' now stands resolved, and now it can be imported.

Anaconda is a Python distribution that executes Python scripts inside a virtual environment. It can also install and manage Python library packages using conda, an alternative to pip.

This is an alternative method to install sklearn into the system in a targeted environment to resolve the No module named 'sklearn' issue.

To install sklearn in Anaconda, open Anaconda3 in an administrative mode. After Anaconda is launched, open a command line prompt like cmd or PowerShell from inside Anaconda.

Opening a command line runner will load it inside a virtual environment of Anaconda, and all the packages installed will be made exclusively available for Anaconda only.

There are a few checkpoints that need to be ensured to install sklearn, which are:

Inside the prompt, write the command:

This will display the current version of conda. Then it needs to be updated using the command:

It asks for a y/n after displaying the list of packages that need to be installed. To proceed, type y and press Enter.

Conda will update itself with all the necessary packages.

Now, to install sklearn, use the command:

In Python, a virtual environment is simply an isolated directory that stores specific libraries and a version of Python so that it does not interfere with other libraries and other Python versions.

Entering the above command will display a list of available packages with sklearn that must be downloaded and installed. It asks for a y/n prompt, and entering y will install all the displayed packages.

After completing it, scikit learn gets downloaded and installed into the Anaconda.

Note: A conda HTTP error might occur while installing one of the above packages if the download timeouts from the server. This specifically happens while Python gets downloaded.

The prompt displays the file path of the bad installation; go to the file path, delete the directory with the faulty download, and retry the above command.

This time it will get completed successfully.

Though sklearn is installed, it cannot be directly used. The reason behind it is that it was installed inside a virtual environment that needs to be activated before.

This will activate the sklearn virtual environment, and now sklearn can be imported and used. If all the steps are correctly followed, the No module named 'sklearn' error would be resolved by now.

In the next section, we will check sklearn’s version and import it.

Import sklearn and Check Its Version in Python

To check the version of sklearn, type the command: 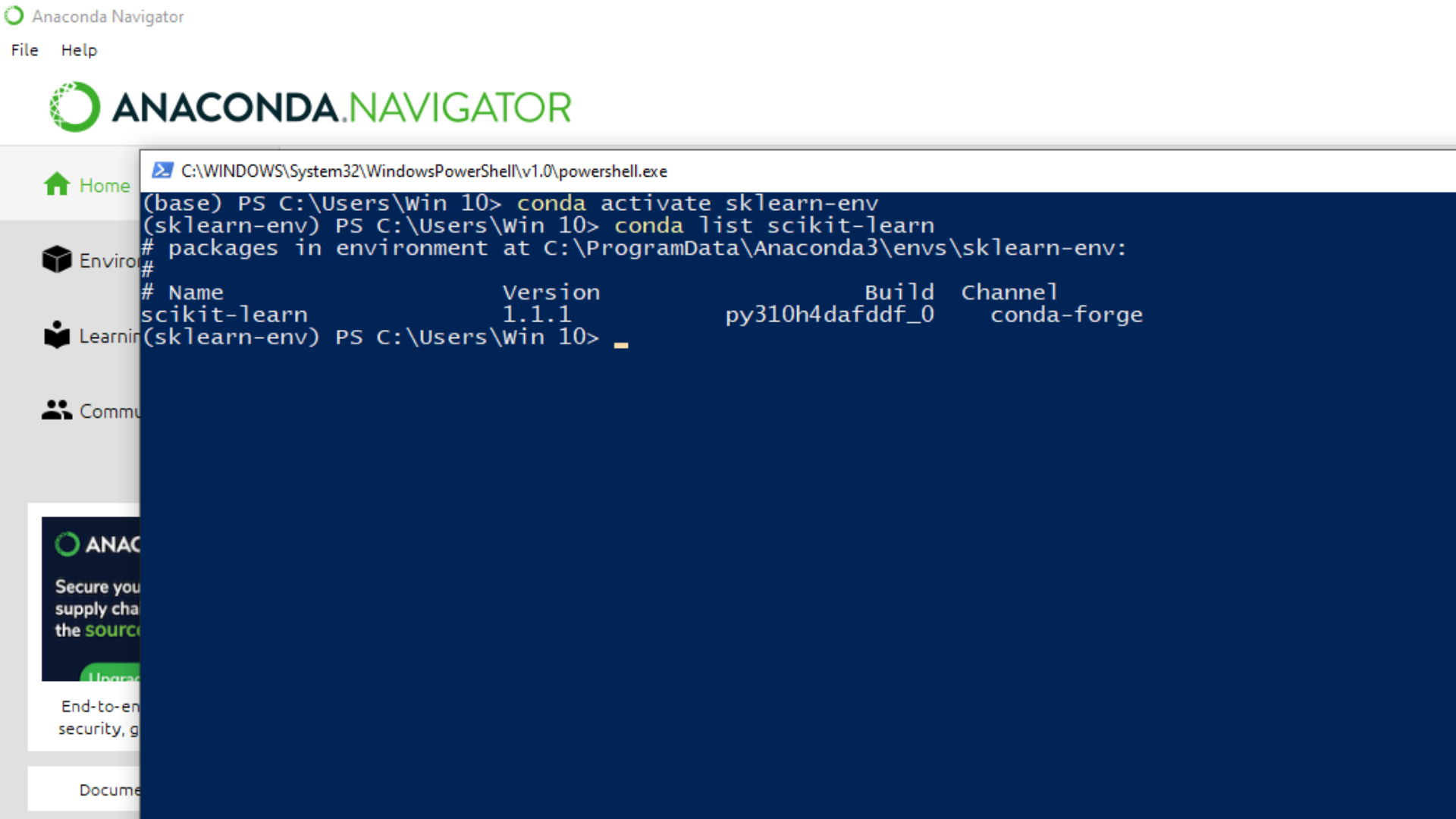 To check all the installed packages, use the command:

To check the version of sklearn along with its dependencies, type:

Now we know that sklearn is installed and working successfully, we can import it by: 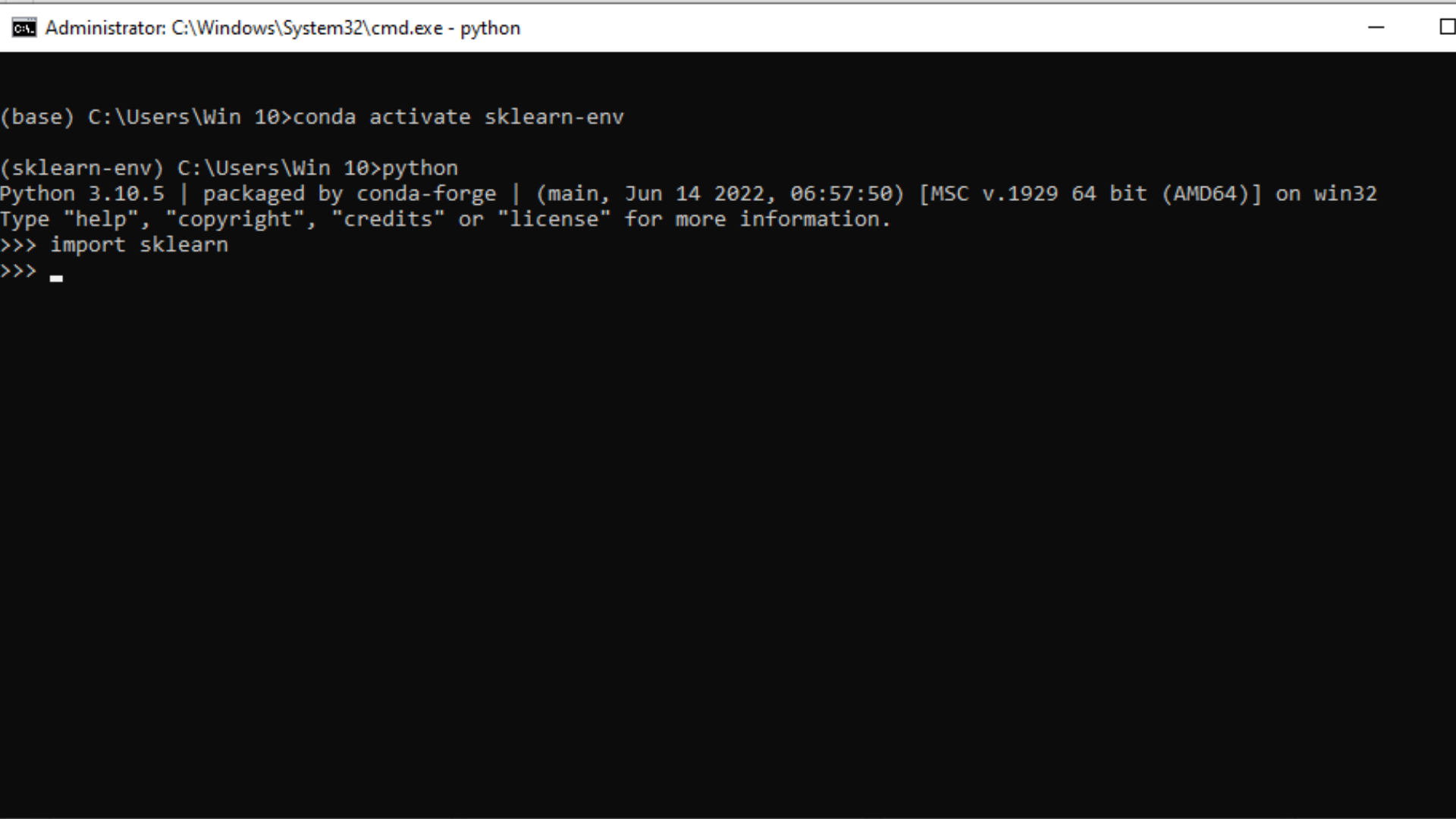 If it shows no errors, that means sklearn is working correctly.

If you again get the error - No module named 'sklearn', remove the virtual environment and packages, restart your system and repeat the above steps once again to get it installed correctly.

It is hoped that this article helped in your learning journey.