This article will explain how to solve the error 'Python.h': No such file or directory. This usually happens when we try to embed Python code in C++, but the compiler cannot find a reference to Python inside the system.

Causes of 'Python.h': No such file or directory Error in C++

Below is a C++ program that uses Python codes.

When this program is compiled, it gives the error 'Python.h': No such file or directory.

Various reasons cause the 'Python.h': No such file or directory issue.

Python Installation That Allows Embedding Its Code in C++

If there is no Python inside the system, or if it is installed and linked but still the error 'Python.h': No such file or directory occurs, it’s because the Python installation did not download the debug binaries with it.

It is recommended that Python be uninstalled and then reinstalled correctly to solve the error 'Python.h': No such file or directory.

This article demonstrates the steps in Windows OS, so the suitable option is to go with the Windows installer(64bit or 32bit). It is recommended to use the 64-bit version if a modern PC is used.

After the download is complete, run the installer, and choose Customize Installation. The Install now option will install Python with default settings but leave the debug binaries out that allows embedding it into IDEs.

Tick the box that asks to Add Python X.X(version) to PATH and then click on Customize Installation.

On the next page, mark all the boxes and then click next.

In the third menu, tick the box Download debug binaries and click on Install. Python will be installed inside the selected directory.

Steps to Add Python Path to IDE’s Include and Linker

This is the reason that causes the error 'Python.h': No such file or directory.

Though IDE can search for files when the package library is stored in the same directory where the C++ script is located, its path should be mentioned inside the program’s #include<> header.

But storing dependencies this way is a bad practice.

What needs to be done is that the path of the library should be linked to the IDE so that it can be included the way standard header files are included, removing the need to provide a file path with the source code.

This is the reason that causes the error 'Python.h': No such file or directory.

At first, an IDE is needed. It is recommended to go with Visual Studio (2017 or later), and this article will cover the same.

Any other IDE can also be used, the steps are identical in most of them, but Visual Studio makes it simple.

Install Visual Studio in the System

The installer of Visual Studio can be downloaded from here. After downloading the 64-bit Community version, install the software, including the C++ development option.

After installation is completed, create a new project.

The window can look intimidating for readers who have never used Visual Studio before, but there’s no need to worry. Most of the features that will be needed are in front, and this article will guide the rest.

Create a project, and give it a name like ‘Python in cpp’. After the project is created, the main window would look something like this:

Add Python Path to Include and Linker

In this step, the Python path will be included and linked to Visual Studio so that the IDE knows where to look when #include <python.h> is written.

A prerequisite for this step is to know the directory where Python is installed and keep it open in another window. Now head down to Debug > Project Name > Properties (Instead of Project name, it will display the project’s name).

Inside the project properties window, go to C/C++ > General > Additional Include Directories, click on the tiny drop button on the extreme right, and then click on <Edit...>. The Additional Include Directories dialog box will open. Here, double-click on the first blank space and paste the path of the include folder from the directory where Python is installed inside the system, then click OK.

After the path of include directory is added, head down to Linker > General > Additional Library Directories. Like the previous step, click on <Edit...>. 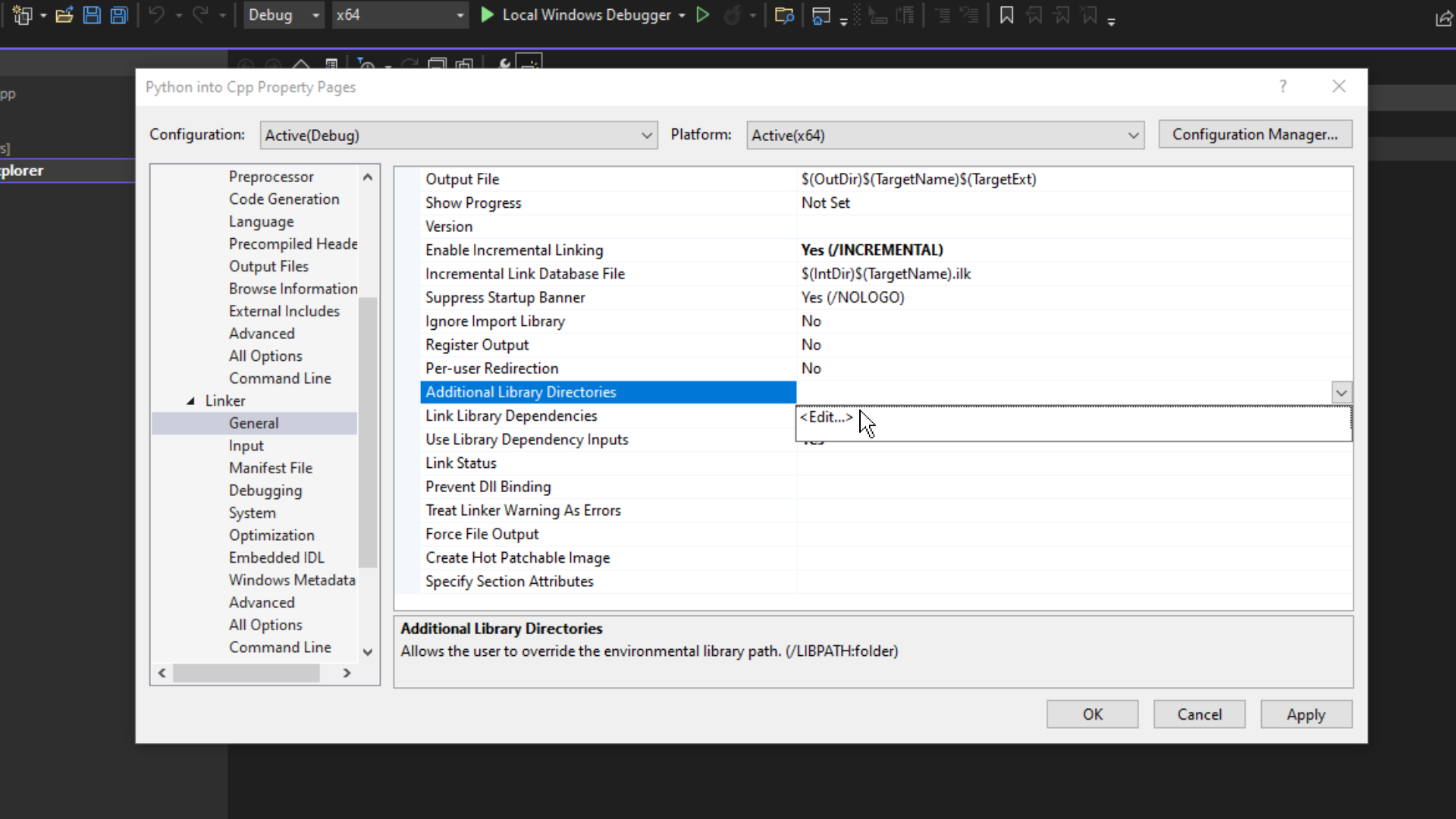 Now, the libs folder should be added to the linker. This folder is also found inside the Python directory, where the include folder is located.

Write Python Codes in C++ and Compile Them

Once the include and linker paths are added, a sample program must be compiled to check whether the above steps have been executed correctly, and the 'Python.h': No such file or directory error is not encountered again.

Go to the solution explorer and right-click on source files. Click on add > new item, give the file a name and click add.

This new file will contain the code that will be compiled.

Below is the C++ program used at the start of the article that threw errors.

Now, when the file is compiled by clicking on the green play button on the top, we get the output:

This article explains the steps to solve the error 'Python.h': No such file or directory. After reading this article, the reader can install Python and Visual Studio and link them to the Python library.