The Lasso Regression is a classification algorithm that uses the sparse and shrinkage in simple models. This tutorial demonstrates how to perform lasso regression in R.

The LASSO is abbreviated as Least Absolute Shrinkage and Selection Operator. When we want to automate certain parts of model selection, the lasso regression is a good choice as it shows a high level of multicollinearity.

Where j is the range from 1 to the predictor variable and the λ ≥ 0, the second term λΣ|βj| is known as shrinkage penalty.

The RSS = Σ(Yi – ŷi)2, in which Σ is the sum, yi is the actual response value for ith observation, and ŷi is the predicted response value.

Let’s load the data in the next step.

Let’s use the mtcars dataset for our example. The hp will be used as the response variable and mpg, drat, wt, qsec as the predictors.

We can use the glmnet package to perform the lasso regression. Let’s load the data.

Once data is loaded, the next is to fit the lasso regression model.

We might need to install the glmnet package if it is already not installed. See example:

The code above fits the lasso regression model and shows the best lambda value and the model plot.

The lambda value which minimizes the test MSE is below. 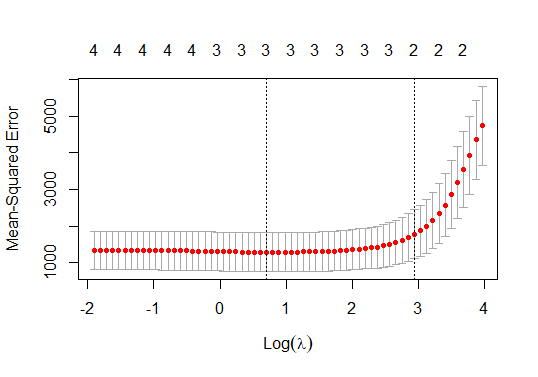 Output for the code will be:

As we can see, no coefficients are shown for the predictors wt and drat because the lasso regression shrunk them to 0. That is why they were dropped from the model.