In this Linux article, we will learn about the lsof command in Linux operating system. We will see how to use this command for different purposes in Linux.

Let’s begin with what the lsof command is in Linux.

the lsof Command in Linux

The lsof stands for the List Open Files command used in Linux to determine whether a port is in use or not. This command returns processes to the user used by the system file in Linux.

It helps us to determine why a file system remains in use and cannot be unmounted.

As we know, Linux operating system considers everything as a file and folder. So the file or a folder used in the Linux system is very important.

Several files and folders are used when we work on a Linux operating system. Some of these files or folders would be visible to the user, and some would not.

The lsof command provides a list of files or folders that are opened on the Linux operating system. This command gives us information to find the files that are opened by which process in the system.

With just one go, it lists all the open files in the output console. The lsof command not only lists common regular files, but it can also list directories, shared libraries, special files in the system, and many other things.

The lsof command can be combined with the grep command and used for advanced searching and listing files in Linux.

Use the lsof Command to List Ports in Linux

To use the lsof command, we need to install the lsof utility if it is not already installed on our Linux system by using the following command in the terminal.

After installing the utility of the lsof command on our system, we can now use it to list files and ports in our Linux system.

List All Open Files Using the lsof Command in Linux

As Linux users, sometimes we want to know what port number a specific process is opened by a file. All the Linux operating system ports are associated with a process ID or service.

We will see different methods we can use to determine which port a file opens a process.

As shown in the example below, we used the lsof command. It will show all the files opened by any process in our Linux system.

As we can see, it shows a long list of files opened by processes in the Linux system shown in the image below. 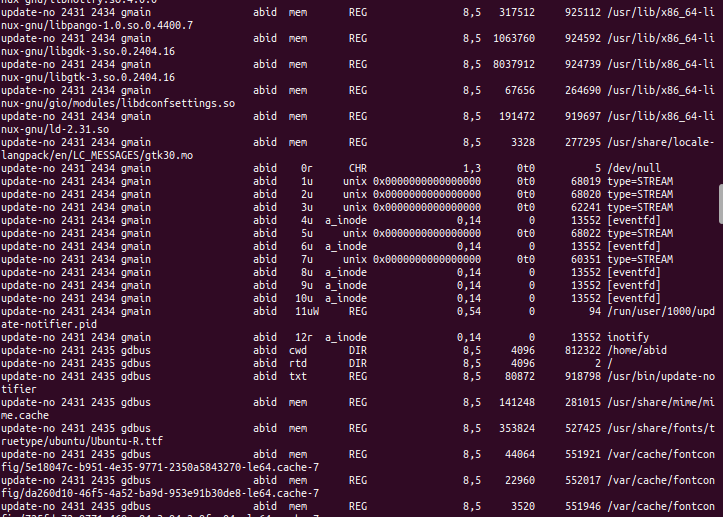 The above figure shows that there are details of files that are opened. The details include processes ID, the user associated with the process, FD (File Descriptor), and the file size.

All this gives detailed information about the file opened by the command, process ID, user, etc.

In case more than one user is using a Linux system. Then each has different requirements, and they use different files.

If we want to find out a list of files that a specific user opens, we use the following command. 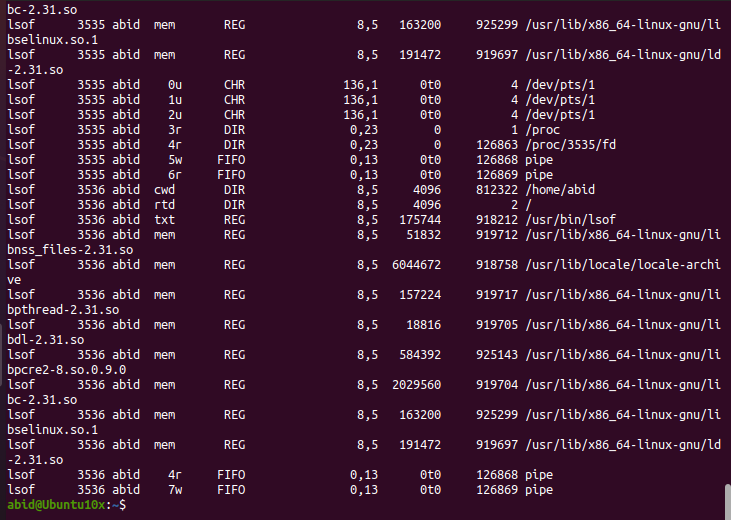 The above figure shows that the command lsof -u abid lists out all the files opened by a user named abid.

We can also see the different types of files (CHR, REG, DIR). CHR is a special character file, REG is a regular file, and DIR is a directory.

List All Internet Files Using the lsof Command in Linux

After running the lsof -i command, we can see that it shows service names and numeric ports in the output.

For example, a specific process called Mysql is running, and we want to find out all files opened by this process. We can find that out by using the lsof command like this:

We can find processes running on any specific port just by giving the port number in the command, as shown in the example code.

Check the Listening Ports Using the lsof Command in Linux

As we know, the lsof is a powerful command in Linux that can provide information about files opened by processes. In Linux, we use the terminal’s lsof command to get all the listening TCP ports.

Command used to show all the TCP ports running on our system:

In the above command, we used -n to not change the port numbers into names. We also used -p to show the numerical addresses of the ports.

We used -iTCP -sTCP:LISTEN to show only network files with TCP state.

After using the above command in the terminal, we can see all the TCP ports running in our Linux system in the output.

We hope you find this article helpful in understanding how to use the lsof command in Linux to list processes or files.